Ripe Papayas are simply good for you

HBGM > Superfood > Ripe Papayas are simply good for you 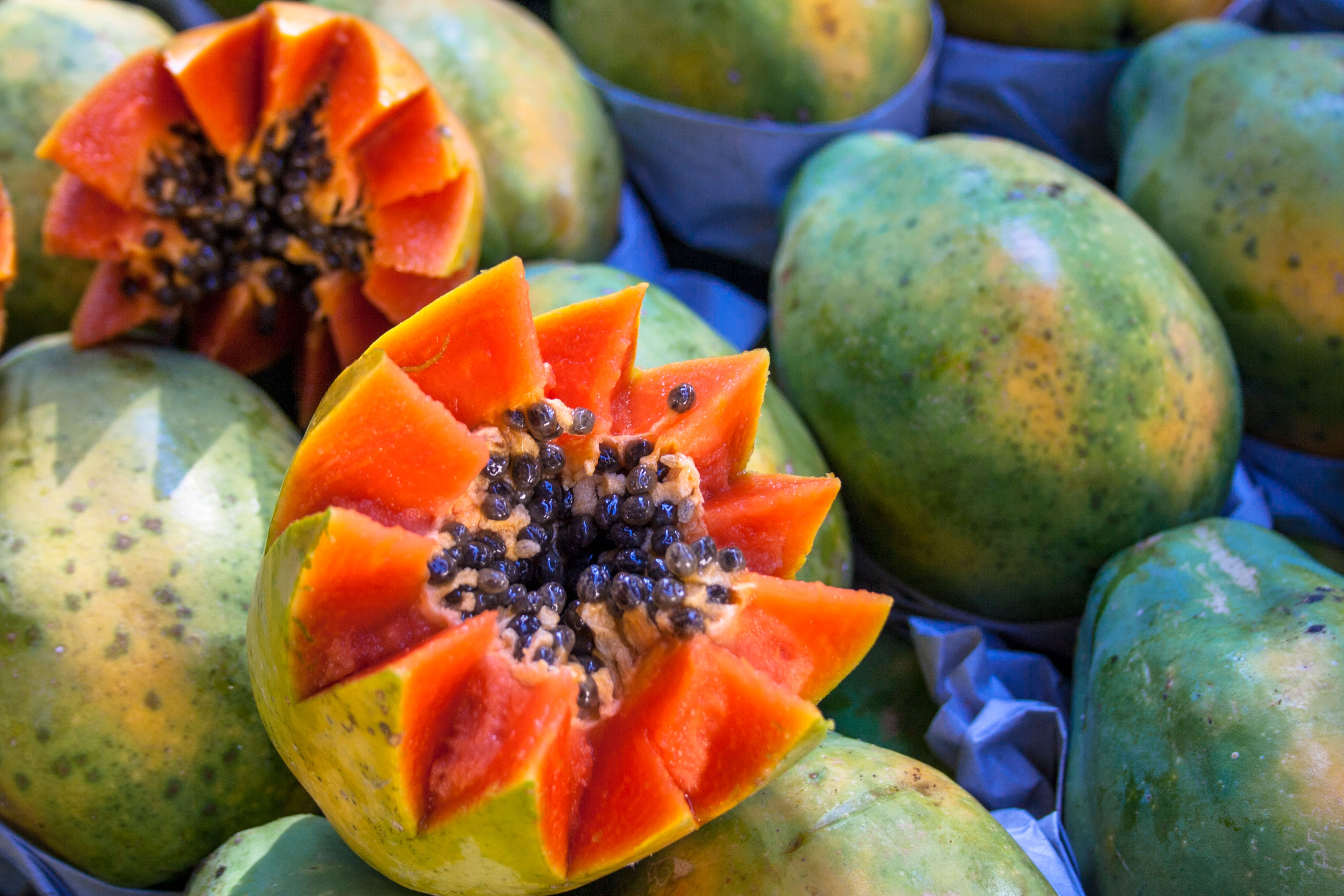 The papaya is a delicious exotic fruit that is loaded with healthy nutrients. It is usually found in tropical regions like Mexico, Central America, Hawaii and the Caribbean. There are two main types of papayas, the Mexican papaya which is around 10 pounds and the smaller Hawaiian type, normally seen in supermarkets and grocery stores. Papayas when ripe are yellow in color, the edible flesh is bright orange and the seeds are black. Papayas can be eaten “unripe or green” but must be cooked and can also be used as a meat tenderizer. The following benefits will encourage you to include papayas in your diet.

Digestive Support: Papaya is known for the enzyme papain. This enzyme papain is one on the proteolytic enzymes that breaks down protein into peptides and eventually into amino acids. In our fast pace society, sometimes we eat junk food, large serving sizes, rush meals and too much red meat. Low digestive enzymes, too much stomach acid and poorly functioning digestive systems are good reasons to include papaya into our diet.

Advantages of papain: Papain is thought of as being comparable to the pancreatic enzyme pepsin, because it is very effective in breaking down meats and other proteins. In scientific cell isolation procedures papain was more favored than pepsin as a more effective enzyme. It is also used commercially as a meat tenderizer. Papain splits the peptide bonds of complex proteins, reducing them to individual amino acids that can be easily used by the body for repair and growth.

Including the enzyme papain with the consumption of a meal that has meat, can significantly increase how quickly that meat is digested. Other proteins, such as casein in milk and gluten in wheat bread, that are known to cause digestive complications, may also be supported with papain.

Papain is one of the Proteolytic Enzymes. Proteolytic actually means the digestion of proteins. These enzymes when present in the blood reduce inflammation by removing oxidize and damage proteins and break them down. Damage or “free radical” proteins are known to assist in autoimmune disorders such as chronic fatigue, severe allergies and an immune system that is more susceptible to infection and disease. Papaya is loaded with vitamin C which is good for the immune system.

The nutrients in papaya help to reduce menstrual pain. For those women who suffer from menstrual pain, should include daily servings of papaya in their diet. One of the benefits of the enzyme papain is it helps in regulating and easing the menstrual flow during a woman’s monthly period.

Papaya is great for eye support: The nutrients in papaya are vitamin A and flavonoids like beta carotene, zeaxanthin and lutein. Zeaxanthin and lutein act as antioxidants in the eye, keeping the mucus membranes healthy and preventing damage to the cells in the eye. Vitamin A in papaya helps prevent age related macular degeneration. Another important thing about papaya is the carotenoids are more bioavailable than the vitamin A in foods like carrots.

Conclusion: It is really very interesting to me how healthy papayas are. I grew up in the Caribbean and eating papayas was something that I did. As a matter of fact, I am willing to admit that in those early years, I was eating healthy and was not aware of it. It is really a treat to eat papayas, because they are delicious and are also loaded with healthy nutrients.

Disclaimer: The information provided on this web site is for educational purposes only and is not intended to be used as medical advice or as a diagnosis. This information has not been evaluated by the FDA and does not represent a cure for any disease.
This is website is associated with affiliate programs and receives a commissions from the products offered.
1195 Union Street Brooklyn, NY 11225
www.healthbeautygrowthmerge.com
1 (917) 538-2325
info@healthbeautygrowthmerge.com